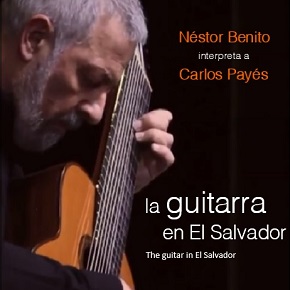 Nťstor Benito and Pablo Sala (Argentine musician and luthier), are working on the project for this new album that has two objectives:

Pablo Sala is in charge of the recording and technical direction.

Carlos Payťs
The passionate music of Carlos Payťs immerses us in a deep world of longings, of subtle feelings with great technical and melodic success. His work contains true romantic gems of guitar literature such as "El Adiůs", "LejanŪa", "Variations on a Mozart Theme" (from the opera Don Giovanni), "Galopa", "Toccata Criolla", the "Salvadoran Songs", or the "Italian Concert" for guitar and orchestra, among other.