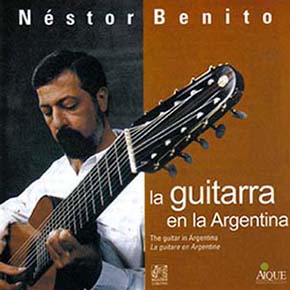 Dances of the Red Land (Dedicated to NÚstor Benito)

Comments of the works

It was recorded by NÚstor Benito for the project "The guitar in Argentina & Latin America", created and directed by himself since 1993 with the aim of promoting important Argentinean composers and rarely known or unpublished works for guitar. It was produced by the Argentinean musician and composer Ivßn RenÚ Cosentino for the record label IRCP VIDEO S.R.L.

The "Las Pampas Suite", was composed in 1979, to pay homage to NÚstor Benito. It was inspired of the themes pertaining to different traditional Argentine folkdances, combining the grace and sweetness of thr Zamba with the rhythm and charm of the "Gato" and the "Milonga".
The "Estilo" gathers the depth and the "Milonga" rhythm so typical of the Pampean styles, ending in the "Malambo Pampeano", irresistible dance of great tÚcnica complexity, presenting variations of remarkable color and effect.
The "Danzas de la Tierra Roja" were composed by the performer in 1981. These three ntive dances belonging to the north-eastern region of Argentina, show the influence of the Paraguayan music.
"Melody" was the last work written by the Master JosÚ Franchini, in October 1983, also dedicated to NÚstor Benito.

The "Suite Argentina" is a succession of typical old-time Argentine folkthemes, where the vivacious dances such as the "Carnavalito", the "Bailecito", the "Zamba" and the "Malambo" alternate with the prosessional "Misa Chico", pertaining to the peasantsٰ devotions, and the elegance and refinement of the meditative and intimate "Estilo", all of them having good taste and high technical level.

The nocturne "Homenaje a JosÚ Franchini" was composed in 1995 for the concert he offered the same year at the Colˇn Theatre in Buenos Aires, to pay homage to his Master. Between 1994 and 1995, he composed Interiores N║ 2 and Tinieblas - Impromptu.


Reviews and notes on the album

Fragment of Eduardo Falu letter for this album

In this excellent version of the ôSuite Argentinaö for guitar solo, NÚstor Benito faces the interpretation of works for guitar by Argentinean composers, something that has been happening in the world of the European guitar, where guitarists feel a great attraction for the rhythms, colors and phrasing of our varied local musical spectrum.

Go ahead then Benito with your firm decision to paint your village to make it Universal, with your art and your guitar.

It is difficult to find a disc that encompasses such a varied and interesting proposal. On the one side the excellence of a guitarist as NÚstor Benito, and on the other, the successful choice of works to perform.
The "Suite Argentinaö by Fal˙, finds here another great performer to emphasize its clear concept. It may be in the ôEstilo", to name one fragment of the work, where the strings find a moving causeway and Benito's hands play with crisp sensitivity.
Franchini's work has an undeniable "gaucho" feeling and the guitar manifests itself with absolute pain, magnifying the presence of solitude even further in some of the works. The "Milonga" of the "Suite Las Pampasö is a clear example.
This international performer supplies the disc market with an invaluable material.

NÚstor Benito, The guitar in Argentina

NÚstor Benito's technique is admirable, and in this record he displays it exquisitely, both in his own compositions, as well as in others by JosÚ Franchini and the folk composer, Eduardo Fal˙.